The Male Menopause – Fact Or Fiction?

t’s interesting that the word ‘men’ is in menopause – since this condition is directly related to women. But that doesn’t mean there’s no connection to men. In fact, there’s a lot of talk about men going through a similar sequence of events as women. But the question still looms. Is there a male version of menopause? Let’s look at the facts.

What is the menopause?

The technical definition of the menopause in women is the cessation of menstrual cycles for more than 12 months. This is caused by a battery of events that occur over time. Estrogen levels decline, the ovaries stop producing eggs, and women become infertile.

This is not a fast process either. The first stage is called perimenopause, which can last for up to two years. Then the main stage of the menopause can take another 1 to 2 years to complete. After this, post-menopause sets in, where all the symptoms associated with menopause slow down and eventually disappear. After that, it’s life as normal, just without menstrual cycles.

There’s no exact age that menopause occurs, but most women experience it somewhere around their 50s. It can be sooner or later, but it really depends on the individual woman.

A number of symptoms crop up in women going through perimenopause and menopause. The end of menstrual cycles is just one of many. They also experience hot and cold flushes, mood swings, fatigue, irritability, insomnia, rapid heart rate, loss of sex drive and vaginal dryness, to name a few.

So what about the menopause in men?

Now fast forward to males. Obviously, men don’t have menstrual cycles, but they do have hormones, and the most important one can begin to decline as men approach middle age.

Testosterone is the most relevant hormone to mention here. It’s the most important hormone in men, as it’s responsible for sexual function, mood, facial hair, muscle mass, strength, energy, and that deep voice men have.

As men approach middle age, their testosterone levels naturally begin to decline, which can be problematic as can be seen in symptoms such as middle-age spread, lack of libido and even erectile dysfunction.

Can testosterone make your dick bigger? >>

The condition often referred to as male menopause is also known as ‘andropause’, or ‘testosterone deficiency syndrome’. Just like estrogen decline in women, the decline in testosterone in men is slow and gradual, but unlike the female menopause, men can actually do something about their dwindling testosterone levels – without turning to harsh drugs. 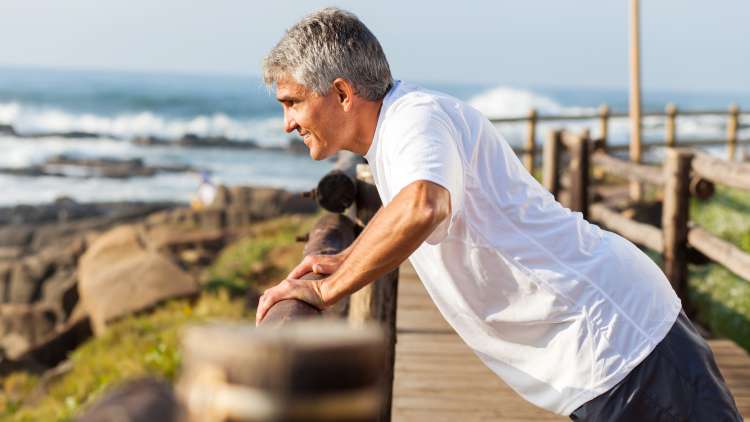 So, what can be done?

If you feel your testosterone levels are starting to decline, there are several things you can do to help your body retain as much of this valuable hormone as possible.

Firstly, stay active. Weight training will dramatically help you to maintain your muscle mass, and in turn help your body to generate more testosterone – a win win situation.

Secondly, follow a healthy balanced diet with quality sources of protein, carbs, and fat. If your body has everything it needs to thrive, it’ll turn its attention to testosterone production.

Lastly, try to steer clear of a heavy alcohol intake – and don’t eat late at night. This will alter your hormones and exacerbate the situation. Plus you’ll be at risk of fat gain, which will promote higher estrogen levels and in turn lower your testosterone levels further.

The only way you’ll know for sure if you’re suffering from declining T-levels is to get a blood test. Once you’ve done that, your doctor can review your situation and make a treatment plan that’ll work for you.

Even if your levels are low, it’s not the end of the world. So long as you’re willing to make some lifestyle changes, you can still live a happy and normal life. And if you’re fine now, but your lifestyle habits aren’t, it’s never too early to change them so you can age more gracefully.

You can slow down the process of testosterone levels declining with age by taking care of your diet and making regular exercises part of your daily routine.