What is DHT? The Ultimate Guide To Dihydrotestosterone And DHT Blockers

Notoriously related to hair loss in both men and women, dihydrotestosterone, or DHT is more than the hormone that causes your hair to fall out. Essential during puberty, DHT supports healthy development, especially for promoting male-dominant characteristics such as a deeper voice and body hair. As an adult, DHT provides an anabolic environment that is ideal for muscle growth.

Since it has been linked as the primary reason that men and women lose their hair, the popularity of DHT blockers has exploded. Is DHT really that bad? Should you be using DHT blockers? Let’s take a look at what is DHT, the effect it has on your hair, and whether you should be using a DHT blocker.

What is Dihydrotestosterone (DHT)? 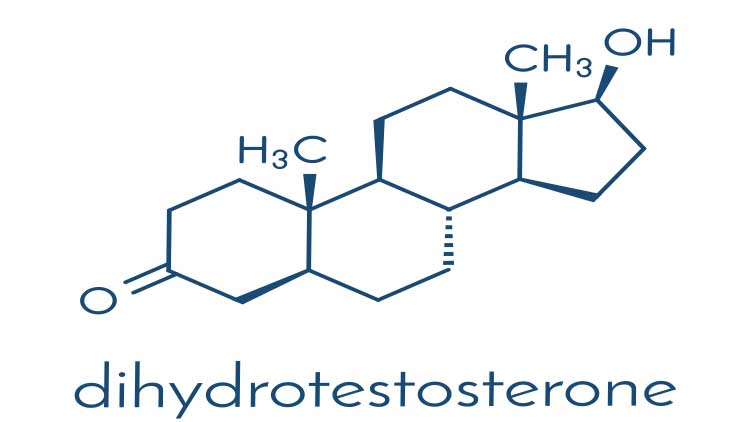 Dihydrotestosterone (DHT) is an androgenic and anabolic hormone that is naturally produced in the body through a conversion process involving testosterone.

Androgenic refers to the development of bodily organs and characters, especially during puberty. For example, sexual organ development, a deeper voice, and facial hair are all androgenic changes. Not to be confused with anabolic changes, which relate almost exclusively to lean muscle tissue growth. This is why bodybuilders and muscle-bound lifters use anabolic steroids; they want to build bigger muscle tissue without the androgenic side effects. DHT is androgenic, but it also exhibits a strong anabolic effect on the body, which is helpful for protecting current levels of muscle mass and promoting new muscle mass growth.

Typically, when a man has too much DHT circulating in his body, he experiences hair loss, increased facial hair growth, and improved muscle building results if he is consistently performing resistance training. Remember that DHT is anabolic, far more so than testosterone. Studies show that DHT improves the uptake of amino acids far better than testosterone, confirming its role as a better muscle builder.

For women, a chronic increase in circulating DHT could result in facial hair growth, hair loss on the scalp, interruption of the menstrual cycle, and acne. In extreme cases, the female genitalia may experience abnormal changes.

Just as there can be an issue with too much DHT, the opposite is also true. There are two ways to look at low levels of DHT: one caused by low levels of testosterone and another that is caused by medication.

Low levels of testosterone and consequently DHT in men can spark a number of serious side effects including weight gain, gyno-based symptoms like man boobs, mood swings, depression, and loss of muscle mass. When someone is taking a DHT blocker as an adult, the side effects may not be as apparent for men because testosterone levels are theoretically high.

Fortunately for women, low levels of DHT are not a concern. There is some speculation that decreased levels of DHT during teenage years could delay the onset of puberty though.

According to the American Academy of Dermatology, over 80 million men and women suffer from some form of hair loss. This problem is more prevalent for men with some estimates claiming that more than 50 million men are suffering from some degree of hair loss. What does DHT have to do with hair loss?

Studies show that dihydrotestosterone has a strange relationship with hair. The presence of DHT is required in order for body hair – leg, arms, chest, armpits, etc. – but if there is too much DHT on your scalp, it can halt hair growth.

When the hair on your head grows, it does so in three key phases:

Anagen Phase: The growth phase of hair that lasts two to six years. On a healthy scalp, around 80% of the hairs on your head are in this phase at any given time

Catagen Phase: The renewal phase for hair that lasts two weeks. Think of it like hair turnover, allowing the hair to become stronger.

Telogen Phase: This is the resting phase for hair. The hair stops growing between one to four months. On a healthy scalp, up to 20% of the hairs on your head will be in this phase at any given time.

When your body is producing too much DHT, it is circulated throughout the body, especially your scalp. The presence of DHT for too long can increase the telogen phase (resting phase) while shortening the anagen phase (growth phase). Over time, the anagen phase becomes so short that the hair cannot break the surface of the skin, resulting in baldness.

If you are beginning to notice signs of balding, your first instinct will be to block DHT. Luckily, there are a number of prescription, over-the-counter, and natural DHT blockers that you can add into your daily routine to prevent or at least slow down hair loss.

The best prescription-based DHT blocker is finasteride. While you may be able to purchase it in other countries through a local pharmacy without a prescription, in the United States, you need a prescription from your doctor or dermatologist.

Finasteride is usually prescribed at a lower dosage of one milligram per day, but the upper dosage is five milligrams. Studies show that finasteride is effective in halting hair loss, but the gains you see will go away if you discontinue using it.

The most popular over-the-counter DHT blocker is minoxidil, better known by the brand name Rogaine. It is available in two percent and five percent concentration with the latter providing arguably better benefits but also increasing the risk of skin irritation.

Studies show that daily application of minoxidil, usually once in the morning and again at night, can effectively halt the negative effects of DHT and promote hair regrowth. Be careful though; studies also confirm that if you stop using the product, your hair loss will continue.

Studies show that these shampoos do exhibit some influence over DHT and helping to regrow hair, but they are best used in combination with other hair loss products such as minoxidil and finasteride.

There are a number of supplements that feature a naturally-occurring ingredient that may be helpful in slowing hair loss and promoting hair growth. Let’s take a look at the top three most-studied ingredients for hair loss:

Saw Palmetto: Available as an extract in capsule form or as a tea, saw palmetto is often used for prostate health, but studies show that it can block DHT conversion.

Green Tea: This tasty beverage can also be found as an extract in supplement form. Studies show that a compound called EGCG in green tea can decrease the conversion rate of testosterone into DHT.

Stinging Nettle: Most often consumed as a supplement or as a tea, studies show that stinging nettle is effective in stunting DHT production.

Dihydrotestosterone or DHT is an essential hormone in the human body that helps to bring about puberty and healthy adult changes. However, when elevated levels of DHT are left unchecked, hair loss may occur. The best way to prevent hair loss is by responsibly using a DHT blocker – preferably a natural DHT blocker. We highly recommend talking with your dermatologist and getting advice on whether you should use a prescription or over-the-counter DHT blocker to protect your healthy hair.